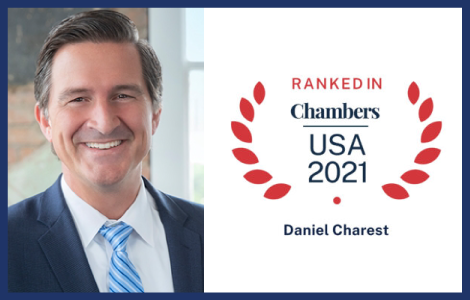 Chambers recognition is one of the most sought-after honors among business lawyers across the nation. This year’s Chambers honor underscores the breadth of success Charest has achieved for his clients and the importance of those cases in the Texas legal landscape.

Mr. Charest is noted for his impressive handling of a wide range of commercial, energy and mass tort actions. According to one source interviewed by Chambers, “He’s professional, deliberate and provides chess-board thinking with outside-the-box litigation tactics.” Another says, “His commitment to clients is amazing.”

Among other significant accomplishments, Mr. Charest served as lead trial counsel in securing a landmark win on behalf of more than 10,000 Houston-area property owners before the U.S. Court of Federal Claims in the largest takings case in U.S. history. The court held that the United States is liable for flooding and property damage caused by the Army Corps of Engineers’ management of Houston-area reservoirs during Hurricane Harvey in 2017. He will again serve as trial counsel when the compensation phase of the litigation is heard later this year.

During the past year, Mr. Charest has been named “Attorney of the Year” by Texas Lawyer, a “Winning Litigator” by the National Law Journal, and a “Litigation Star” by Benchmark Litigation. Earlier this month he was named among the “Best Lawyers in Dallas” by D Magazine.

The Chambers USA guide is produced by London-based Chambers and Partners, known worldwide for its thorough guides to the legal profession. Recognition is based on thousands of attorney and client interviews to identify lawyers who demonstrate top technical legal ability, professional conduct, client service, commitment, and other key qualities.